The airline connecting the islands of Tahiti
Contact us
Cargo
Help

Tahiti is the biggest and the most populated island in French Polynesia. As the political and economic heart of the country, Tahiti stands out from traditional Polynesia. The capital city Papeete is very busy and rounds up many businesses, banks, hotels, restaurants, bars and discotheques.
See more

Population : 192 760 inhabitants were recorded in Tahiti in 2012, representing nearly 70% of the country's population
Surface area : 402 sq. miles. Tahiti is the largest island of French Polynesia
Municipalities : the island is composed of 12 municipalities. Papeete (the capital of Tahiti and French Polynesia), Pirae, Arue (associated with Tetiaroa atoll), Mahina, Hitia'a O Te Ra (including Papenoo, Tiarei, Mahaena, Hitiaa), Taiarapu-East (including Faaone, Afaahiti-Taravao Pueu and Tautira), Taiarapu- West (with Teahupoo, Vairao and Toahotu), Teva I Uta (with Mataiea and Papeari) Papara (known for its surfing spot ), Paea, Punaauia and Faa'a (with the international airport ; it is the most populated municipality of Tahiti ) 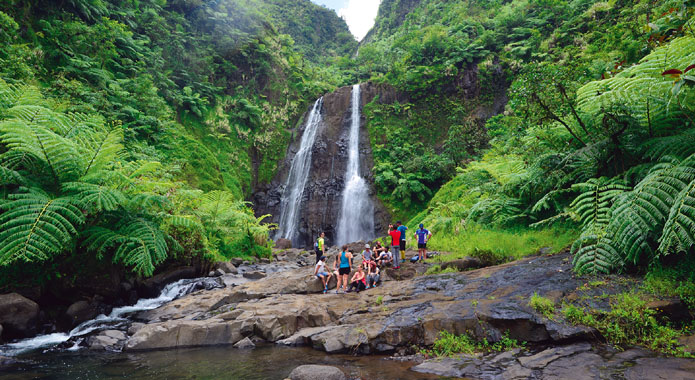 The good reasons to visit

And on Tahiti Iti :

Did you know that

Tahiti-Faa'a International Airport is located in the commune of Faa'a, 5 km (3 mi) from Papeete. See the airport location map.
It operates both international flights and flights to and from the rest of French Polynesia.
The Air Tahiti agency and our check-in desks are located in domestic terminal 1. See the plan of Tahiti-Faa’a Airport.

Transport between the airport and the rest of the island is provided at all times by taxis and, at certain times, by a bus service (stop close to the airport).

If you have booked tourist accommodation, find out from your hosts whether they can arrange your outward and return transfer.